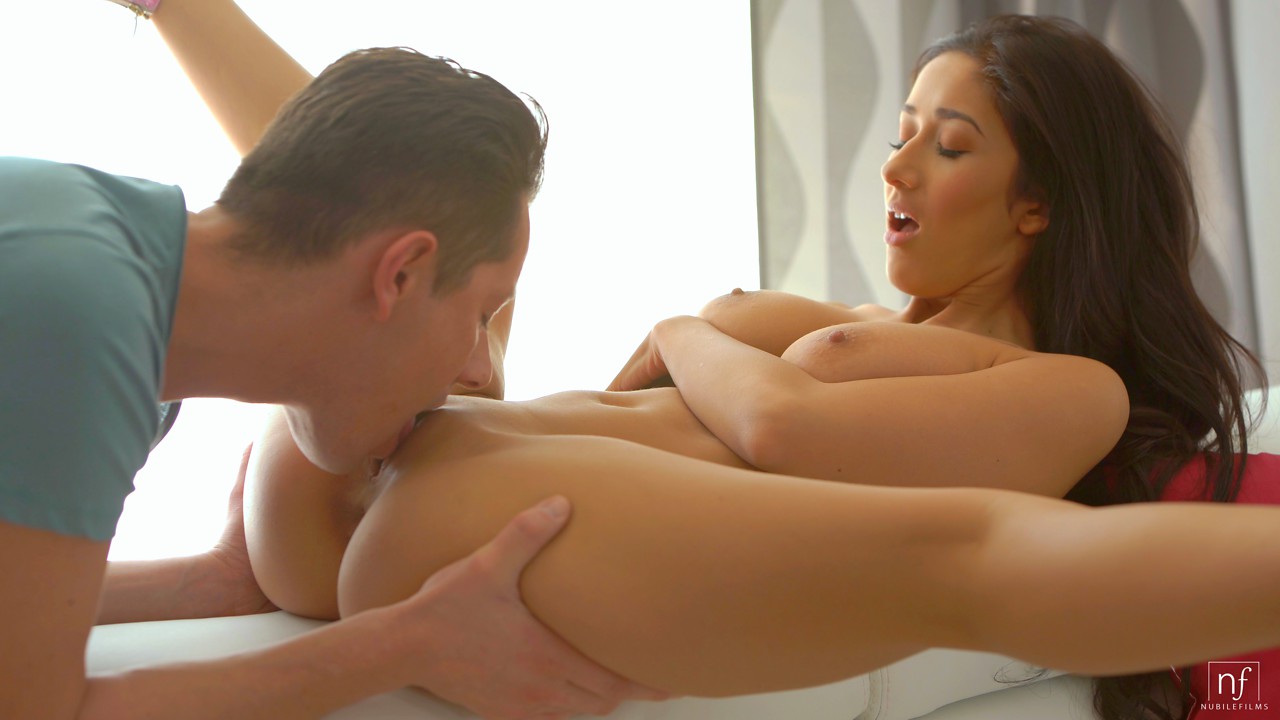 Nick Ross can’t take his eyes off the television set and his teen girlfriend Darcia Lee has had enough. Strutting into the room dressed in nothing but a sheer jacket and formfitting pnaties, Darcia takes a seat on the couch and spreads her legs before going to work. Her hands are firm and knowing as they pop her tits from the jacket and caress her big boobs. Once her nipples are nice and hard, she turns around to show off the way the thong presses against her anus.

Once she is assured she has all of Nick’s attention, Darcia continues the show by running her fingers in slow circles around the crotch of her panties. Rising to her feet while she shrugs off the jacket, she brings herself closer to Nick so he can do what he will with her. He is quick to draw her close with his big hands so he can bury his face between her breasts before licking and sucking each nipple to hardness one at a time. Letting his hands slide lower, he feels the heat emanating from her twat even through the fabric of her thong.

Turning Darcia around, Nick slides her underwear down so he can feel the smooth skin of her hips and ass. That big booty calls to him, but not as much as the glistening space between her thighs. He takes a few moments to indulge once again in the heft of Darcia’s large knockers, then turns her around so he can dive in to the musky dampness of her twat.

Nick’s pussy licking soon has the stunning Latina coed throwing her bead back and filling the room with her moans. She slips her hand down her body, letting her fingers caress through Nick’s hair as he eats her out. Her gentle touches guide his tongue and soft lips, letting him know exactly where Darcia needs his attention the most to reach a climax of epic proportions.

Now that she’s been temporarily sated, Darcia is happy to help Nick start the gradual climb towards his own climax. She lays him down on the couch, then unzips his jeans so his stiffie can spring free. She licks his shaft lovingly before settling on wrapping her puffy lips around the head of his dick. Her hand strokes as her mouth moves, creating a perfect storm of stroking and suction. Pulling back a little bit, Dacia rubs the tip of Nick’s penis against her breasts, luxuriating in the feel of silk-covered steel against her tender breasts.

One kiss later, Darcia has slid her twat down to hover over Nick’s fuck stick and has pressed down until she’s fully impaled. He sits up as she rides him, adjusting his position so that he can cover her bouncing bosom with his big hands and squeeze the tender globes with each thrust of her hips. Her bare pussy throbs with sexual tension as she disengages from Nick’s touch and leans forward, changing up the angle just so until her ecstasy explodes through her greedy body.

Arranging herself on her hands and knees, Darcia invites Nick inside once again. He slides balls deep, filling her as he fulfills her need for a fast and furious coupling. Gradually raising her torso until her back hits Nick’s chest, Darcia luxuriates in the lush fulfillment of her boyfriend’s big dick thrust deep inside.